So on top of the Pikabug Poke Patrol fleet, there are two other "Pikabugs" that are worth mentioning.

The famous NYC toy store FAO Schwarz wanted to have an exciting, over-the-top item on their 1999 Holiday Catalog. They got with Nintendo and offer a replica Pikabug for the Holiday Catalog. Nintendo intended to only create one for the catalog, but to Nintendo and FAO's surprise, two orders were taken at the same time, forcing Nintendo to create two of these Pikabugs. The toy store wanted Nintendo to make even more to sell, but Nintendo declined, adding to the rarity of Pikabugs. Since these Pikabugs were never owned by Nintendo, though they look identical to the PokePatrol cars, they were not registered to Nintendo. They are exact replicas of the fleet Pikabugs, including the TV gaming display in the hatch. PIKA7 was used for photos in the catalog. Only one of these FAO Pikabugs are accounted for.  ​ 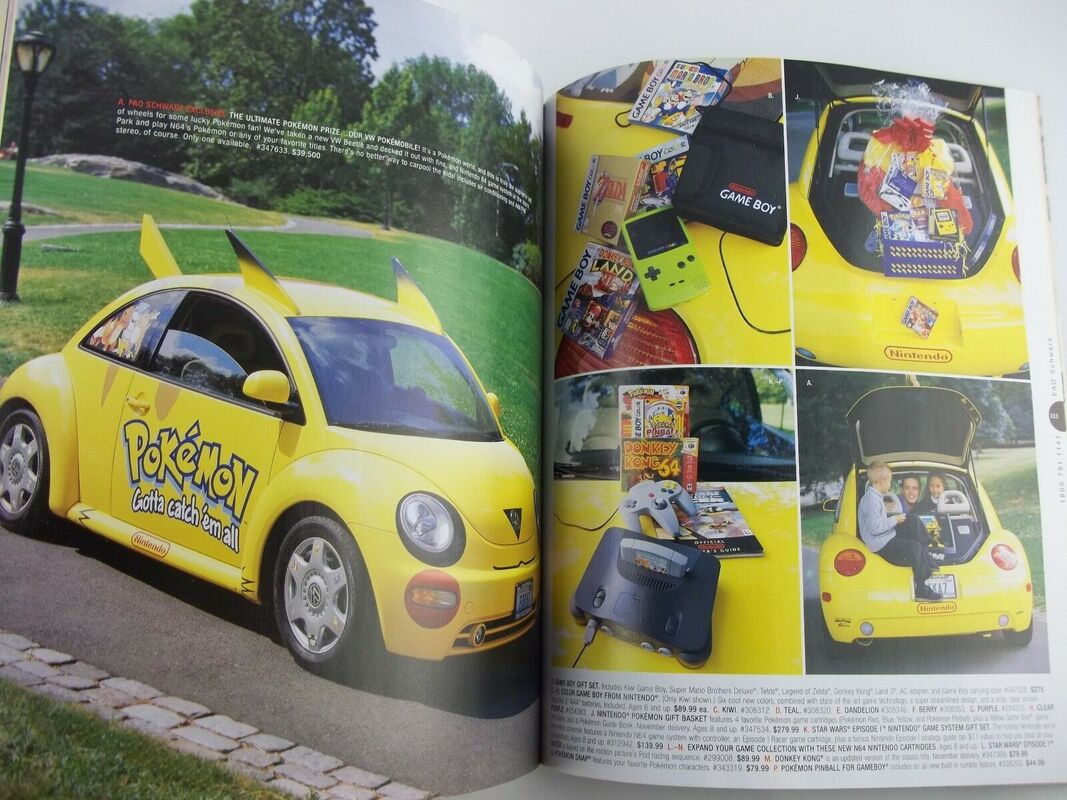 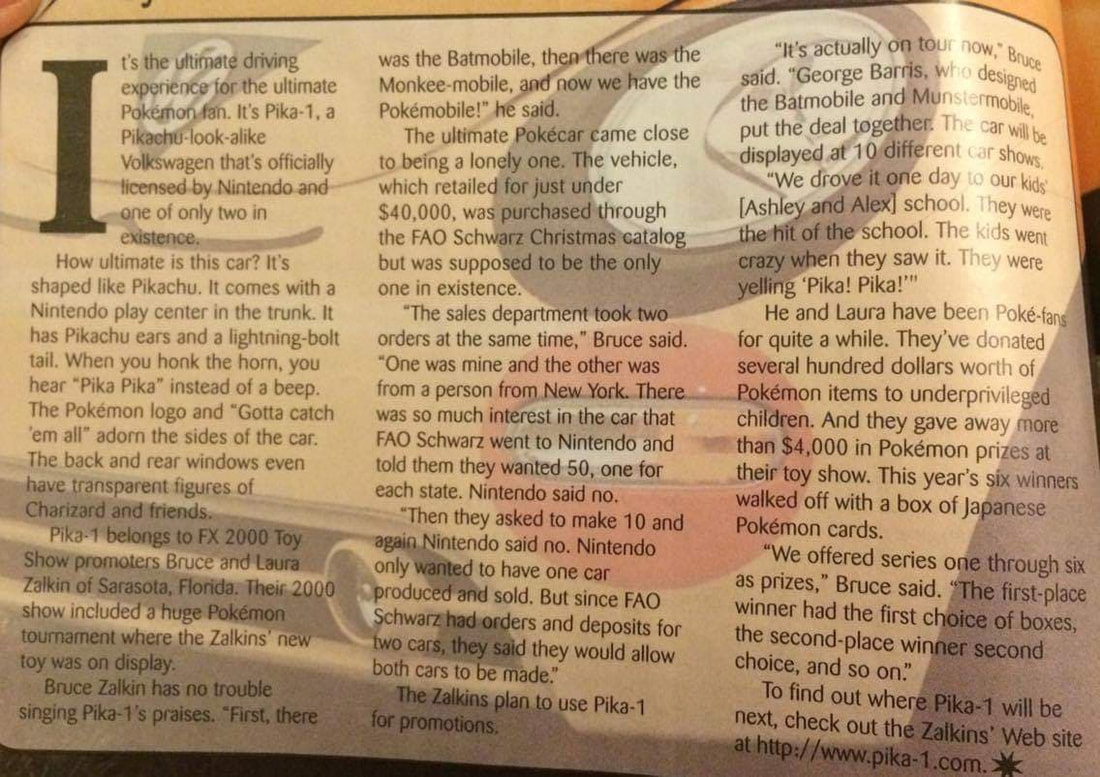 Article from a gaming magazine interviewing the man that purchased one of these FAO Pikabugs.

There is very little known about the Barris Pikabug, or how it came to be. This Pikabug, coined "The Pikachu Mobile", was designed by famous car designer George Barris. This Pikabug has several differences in looks, especially on the ears and tail. It was never owned by Nintendo according to the Carfax.

It was auctioned off along with other Barris Kustoms  in 2005. This is from an auction website:

Ostensibly this is the Pokemon Pachuka, the most popular of all Pokemons. This car is one of the promotional show cars built for the young kids and their collector car series. It doubled as an exhibition car for general promotions including toys and games.

Pokeman (short for pocket monsters) is a series of commercial ventures in children’s entertainment. There are some 150 individual Pokemon’s and their exploits are explored in animated cartoons, games, videos, movies, books, trading cards and etc.

It is currently registered in California and the owner has yet to be found. 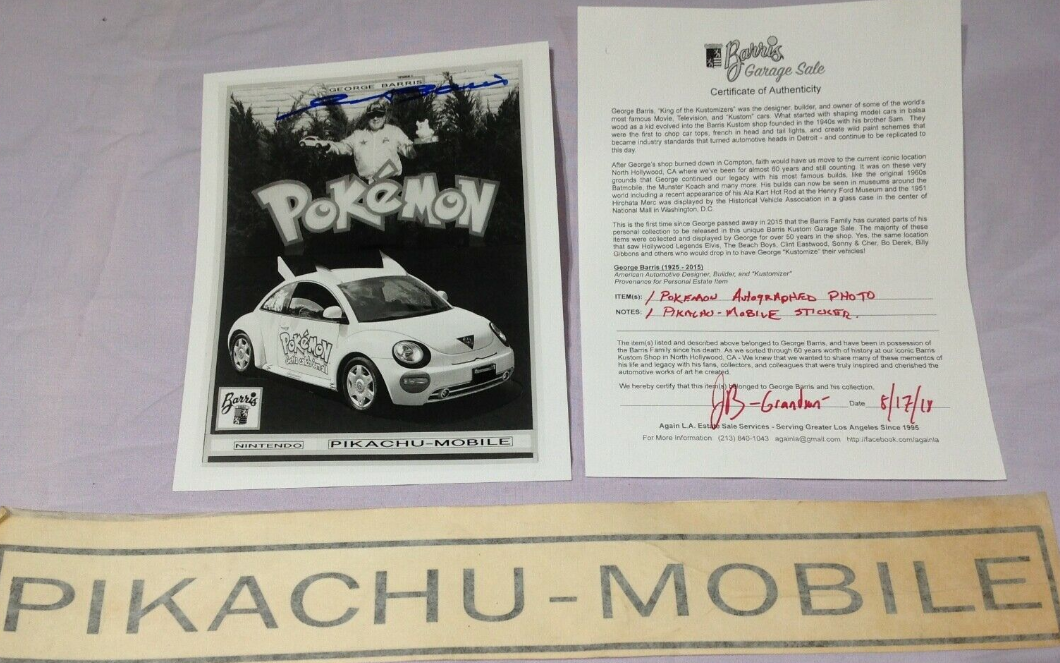 Certificate of Authenticity of Pikachu Mobile design. Note that the image used is the same one as the FAO Schwarz Catalog and not actually the design Barris did. 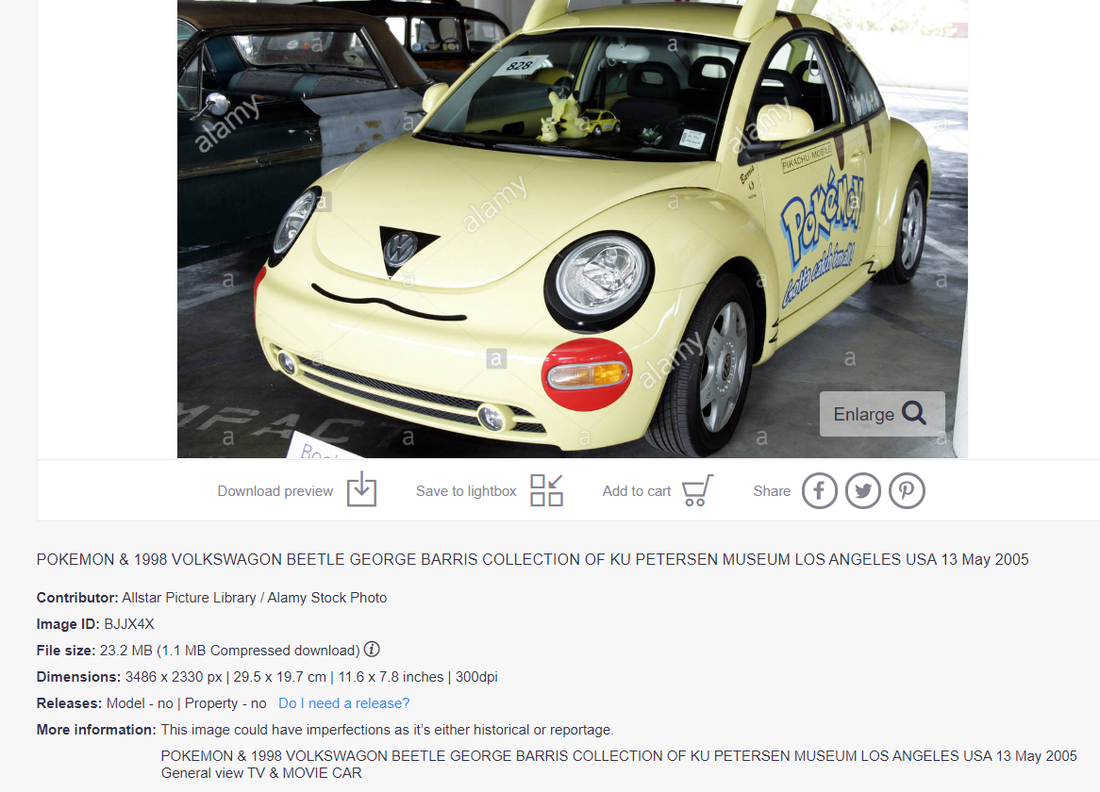 Website showing the Barris Pikachu mobile on display at the Auto Museum in 2005.